Speak Up to Get Ahead in the Workplace 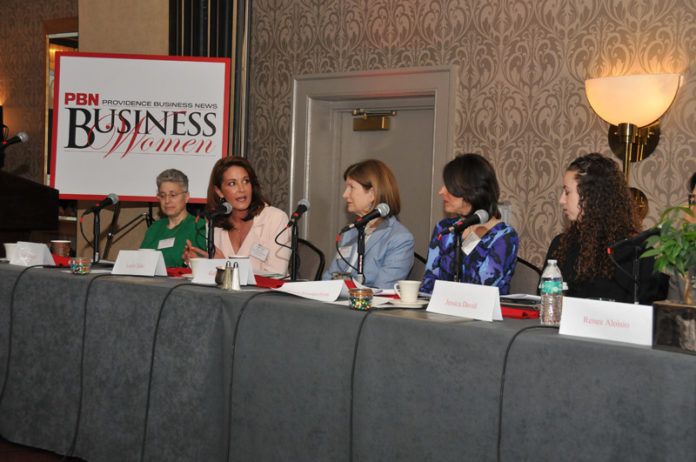 When Leslie Taito, a senior vice president at Hope Global, was at an early point in her work life, a male customer once told her she was “prettier than a speckled pup.” As if channeling many businesswomen’s lifelong task of cleaning up gender relations in the workplace, Taito told the man, “You know, you just called me a dog.” The story elicited some wry smiles from the audience at the Business Women’s Summit, hosted by the Providence Business News May 12 at the Providence Marriott Downtown. The summit and a panel discussion preceded an awards ceremony for this year’s Business Women’s Awards winners.

A few more stories of gender assumptions in the workplace – like one from a panelist who said she no longer takes a notebook into meetings because of the assumption that the woman in the room takes the minutes – followed Taito’s anecdote about her customer. But for the most part, the summit, lunch and awards day was a festive time of accomplished Rhode Island women celebrating achievements and sharing ideas about how to rock the business world in high heels – sometimes pushing against overt or covert biases. In addition to Taito, members of the panel were Renee Aloisio, chief operating officer and partner at LGC+D; Jessica David, senior vice president of strategy and community investments at the Rhode Island Foundation; Renee Evangelista, a lawyer and one founder of Howland Evangelista Kohlenberg Burnett; Kati Machtley, director of the Women’s Summit at Bryant University; and Dr. Angela Caliendo, vice president of the University Medicine Foundation and executive vice chair of the Department of Medicine at the Warren Alpert Medical School of Brown University.

Among topics such as communication styles, pay equity, flexibility and the value of mentoring, one recurring theme about female life in the business world was the need for women in business to simply banish uncertainty and speak up. In opening remarks, R.I. Secretary of State Nellie Gorbea said women sometimes hear an internal voice that discourages them from voicing a fresh idea. “We need to be that voice and to raise a hand,” Gorbea said. “To let things lie is a sure way of not changing the world.” Defining “intrapreneur” as someone marked to do innovative thinking within and for an organization, Evangelista said women should craft their careers with smart strategizing. “Be fearless; think strategically,” she said. “As you shape your message better, people start to rally.” Assertiveness is important in promoting oneself for raises and bonuses, something women are not particularly good at, panelists said.

Machtley said the gap between what women and men earn in equal jobs has only narrowed by 4 cents – from 75 cents to 79 cents to the dollar – in the past 20 years. She said 63 percent of women do not ask for raises, but 75 percent of those who do ask get the raise. Machtley said women need to learn to negotiate for themselves at the start of their careers or they will never catch up. Evangelista concurred: “We need to advocate for ourselves or else we are leaving money on the table.” Women’s tendency to defer to others also enters into the prickly arena of communications. Caliendo said, “Men look at things … differently, than women do. I had to define my voice and to have the confidence to be able to deliver my message in a way that men could hear it.”

Women’s communication with each other also is important. The cattiness of middle school does not help women in the business world, speakers said. “We have to figure out how to give honest and good feedback and not be brutal about it,” said Taito. Panelists agreed that finding and using a mentor is important and that senior people have a responsibility to offer their expertise to younger people. “Make time for a mentor,” said Aloisio. “If you find you are not getting what you need you have to ask for it. Do it for yourself and then return the favor.” David elaborated on the point, saying that she seeks out women whom she admires and emulates them. David also raised points about the subtly of gender bias in the workplace. She said she’s been in meetings in which men spoke only to each other as if she were invisible.

Also, “it drives me crazy when women are asked to take notes,” David said. “There seems to be a sense that caretaking falls to women unless it is called out as something that everyone is supposed to do.” “We have to stop judging; we have to stop assuming” things about women’s preferences and needs, Caliendo said. “Stop assuming a woman would say no to a job with travel because she has young children. There are opportunities for everyone.”